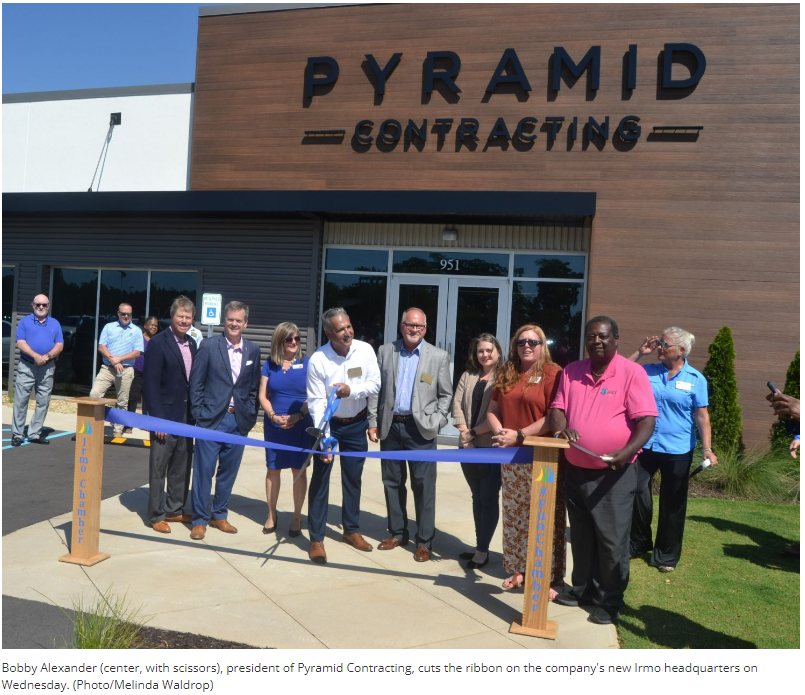 A year shy of its 20th anniversary, Pyramid Contracting is celebrating a new home for its business.

Company executives joined state representatives and city officials to cut the ribbon on Pyramid’s new corporate headquarters at 951 Western Lane in Irmo on Wednesday. Pyramid crews completely renovated the former Sea Ray Boats facility just off Interstate 26 as the company relocated from its former Irmo office on Lykes Lane. “I’m most proud that our employees put their hands on and self-performed so much of the work in this building,” Bobby Alexander, Pyramid president, told SC Biz News after cutting the bright blue ribbon to a round of applause. “We’re very proud of it.” Alexander founded the company in April 2003 with one location and nine employees. Now, Pyramid has six locations in three states and employs 50.

The contractor, which specializes in commercial, federal and defense construction, was the 2018 South Carolina 8(a) Construction Firm of the Year. Alexander credits joining that Small Business Administration program, which provides training and technical assistance to firms owned and controlled by socially and economically disadvantaged individuals, in 2015 with helping spur his company’s growth.

“There’s other good construction companies, but we want to be thought of first when it’s ‘Who do we want to talk to about our project?’ ” he said. “That cannot be done without talented people … We try to put together an A team on everybody’s building.”

Irmo Mayor Barry Walker joined Rep. Nathan Ballentine, Rep. Chip Huggins and representatives from the Irmo and Columbia chambers of commerce in presenting Pyramid with commemorative certificates and plaques before the ribbon cutting.

The six-month renovation of the building fitted the exterior with a modern wood finish and the opened interior with glass walls and hallways lined with photos of company projects. Pyramid’s portfolio includes the 10,000-square-foot City of Columbia Parks and Recreation Center, constructed in 2011; the 2008 turnkey development and construction of the 14,300-square foot Cedarcrest Shopping Center in Lexington; the 2017 renovation of 5,200 square feet at Columbia Craft Brewing Co.; and the restoration of the Fort Jackson Combat Museum in 2016.

“This is our corporate office and our home office,” Alexander said, watching as people filed into his company’s new building. “I think that it speaks to the quality of construction that we can deliver.”